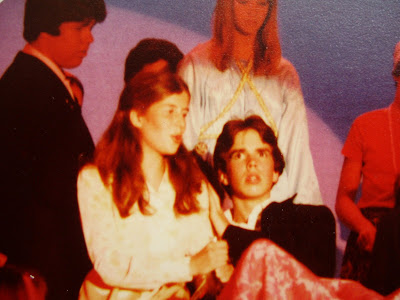 When I was in middle school I figured it wasn't out of the realm of possibility that I would be a Broadway star someday. Why not? I'd gone to see Annie, starring that unknown kid, Sarah Jessica Parker, hey, if she could do it, why not me?

Well, to start with - she could sing. Me, not so much.

But I had a good reading voice and was able to act some, so I did get a small featured role in our eighth grade production. I killed the prince. It was an accident. I felt bad about it. Can't you tell? That's me informing an astonished prince that I may have just poisoned him.

That was my last acting role. I figured I'd be in the high school plays, but after not getting in the show my freshman year I didn't try out again. Instead I worked backstage - which I loved, by the way.

In When Mike Kissed Emma, Emma is much more talented than I ever was. She gets the lead in the school musical. Now, if only her boyfriend, and not Biker Mike, of all people, were playing the male lead, then everything would be perfect. But when it comes down to it - what's perfect?