I see a lot of people do this - a quick five things on a Friday.

Let's see what I can come up with.

1) Busily working on revisions that are morphing into a rewrite for Always, Ali the fourth Ali book.

2) It's summer vacation, which means that as a family we are pretty much as busy as during the school year - except the weather is nicer and we can hang out in our secret garden, which maybe isn't so much of a secret, but is a nice little garden. 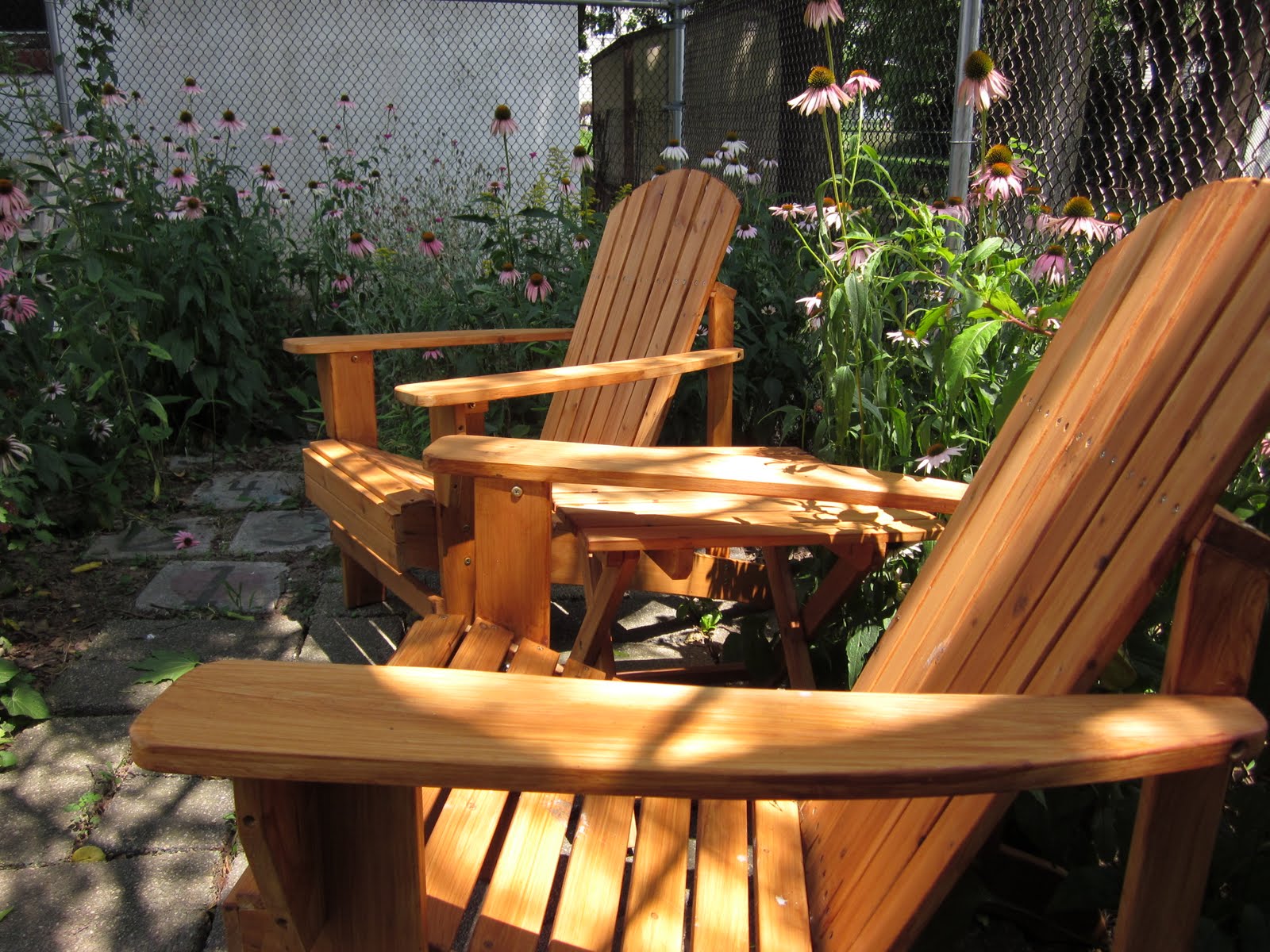 3) I've been re-reading some old books on my Nook. I love finding digitized copies of public domain works. I've discovered some great unknown (to me) stories this way and read some classics. Including Les Miserables, which pretty every body knows about and Queed, which no one remembers anymore.

4) It's harder than I thought to come up with five things.

5) Okay, that was cheating, I admit it. In reference to number one, I find it more difficult to get into a writing routine when the kids are not in school, but at least, as the week is drawing to a close, I seem to be making some progress, which is good. In the meantime, it seems that all the bookish people I know are headed to Las Vegas this weekend for ALA. I'm not. So, I have no excuse not to continue revising.

Happy Summer.
Posted by christine M at 2:07 PM No comments:

When I was in high school my friend and I used to make plans to backpack through Europe when we graduated. I think pretty much everyone made these kind of plans. The closest we got to doing that was a few years after we were out of college we spent a week in Belgium and Holland, armed with only carry-on luggage.

My daughter is in high school now and she and her friends are making similar plans. They have the added bonus of a German exchange student/best friend who is heading home and who they want to visit.

It seems to be the perennial dream of young people to travel and to see the world.

And the dream is nothing new.

There are three books I've read in the past year or so that deal with teens/young adults traveling to Europe. The thing is that these books are all written or set in the late 1800s and the early 1900s. 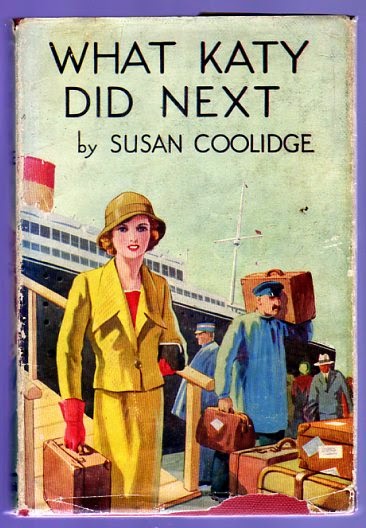 The oldest one is What Katy did Next, it is the sequel to What Katy Did by Susan Coolidge (pen name for Sarah Chauncey Woolsey) it was written in 1886 and in the story our young heroine, Katy, gets taken on a once-in-a-lifetime trip to Europe by some friends. (This cover appears to set the story in the wrong time period) 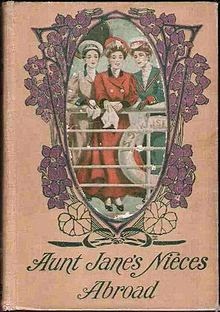 The next book is Aunt Jane's Nieces Abroad written and set in 1906. It is by Edith Van Dyne (pen name for Frank L. Baum). This is part of the Aunt Jane's Niece's series, a popular series for high school girls at the turn of the century, putting the lie to the idea that books written for teens is somehow a new phenomenon. In this book Aunt Jane's nieces, three girls between the ages of 15 and 17, are brought to Europe by a rich uncle who wants to give them great experiences. They have them, including witnessing the 1906 eruption of Mount Vesuvius. 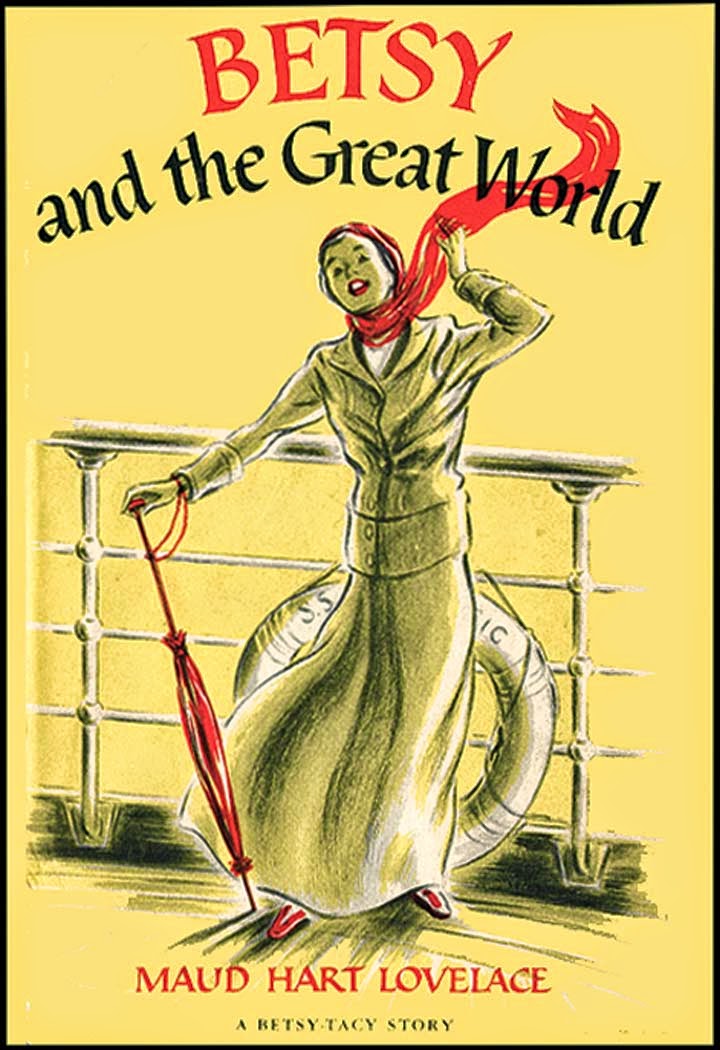 The third book is Betsy and the Great World, part of the Betsy-Tacy series by Maud Hart Lovelace. This book was written in 1952 and set in 1914. In this book, Betsy decides not to finish college but to travel around Europe in order to get the experience she needs to be a writer. She has to make a hasty trip home when, after several months, war is declared.

I love each of these books individually. Together they present an interesting look at travel before the age of airplanes. Although the three European trips take place over a period of about 30 years, they are all much more like each other than they would be to any modern trip to Europe.

First of all, they all travel by steamer. Of course. You did not fly to Europe, you took a boat. And the boat was a large part of the voyage. These were not today's cruise ships. Instead of lavish buffets and nightly shows we hear about deck chairs and porters and quiet evenings looking at the sky and immense sea. Getting to Europe was as much a part of the adventure as being there, when you traveled by ship.

The other huge difference was that in each of these cases the trips were expected to take a substantial amount of time. If it takes nearly a week to get someplace, you don't turn around and come home a week later. In What Katy Did Next, she expected to be gone close to a year, but came home sooner. The same was true for Betsy in Betsy and the Great World. Aunt Jane's nieces seemed to have a shorter trip planned, not meaning to be away for more than a couple of months.

I traveled overseas while in high school, spending a summer month with relatives in Germany. I did not travel far from my cousin's house near the alps, but still got to see some of Austria as well as several famous landmarks in Germany. It was a fantastic experience, even if it doesn't come close to nearly a year traveling between different countries. (The picture was taken in Austria by the Bodensee or Lake Constance) 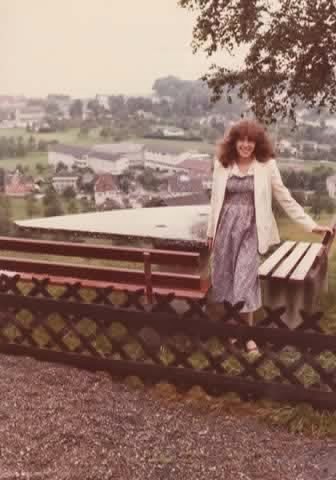 My daughter's school is sponsoring a trip for next year's graduating seniors to go to Europe. It's well-planned and expensive. The trip lasts a nine days and the students will see the best of London, Paris and Rome. About two and a half days per city. They catch all the high lights I'm sure, but she's going to save up instead for the aforementioned trip to see her friend, and travel around Europe with her.

Three cities in nine days, is a pretty quick way to get a taste of Europe, and many people don't expect much more from that from a trip to Europe. The romance of a trip to Europe is lost that way though, the chance to really see a place, to soak in it's atmosphere, can't happen as you bustle from tourist site to tourist site. I don't imagine that the average person got to travel to Europe at the turn of the last century and spend most of a year there, even a hundred years ago most people couldn't afford either the money or the time.

But people could read about it, then and now. I love the insight into overseas travel these three books, especially when read together, give to the subject.

So, this is my writing blog. What does all this have to do with writing? Only that the experiences we have can always be fodder for stories, and that so much can be learned by reading, even reading hundred-year-old "children's" books.

It’s been a long time since I’ve done anything on this blog and when Barb at Franciscan Mom asked if she could tag me in the Writing Process Blog tour I figured it was as good a time as any to jump back in.

What am I working on?
I actually have several projects going right now. I’m waiting for page proofs for the third book in my Ali Caldwell series, Honestly, Ali. Ali is a character I’ve had a lot of fun working with and I have one more book to go in the series. That’s one of my other projects, I am in the middle of revising book four, in the series, tentatively titled Always Ali. This spring I also finished two rough drafts of completely new books, one has to do with bullies and how things are not always as they seem and the other is something completely different, and I’ll keep the details on that one secret for now.

How does my work differ from others of its genre.
That’s a hard question. My YA books have no vampires. It’s easy to say I’m not like this person or that person in my writing, but there are other people out there who write sweet stories that don’t spend a lot of time dwelling in the dark places. That’s what I write. Scary things happen, but the stories overall have a lighter feel than some contemporary YA.

Why do I Write What I Write?
Because I enjoy it. It’s simple really. I feel comfortable with the kinds of stories I write, and when I have teens tell me that they’ve read WHEN MIKE KISSED EMMA multiple times and it’s their favorite book, then I figure I’m doing something right.

How does my writing process work?
When I start a story I like to have some idea where I’m going with it, but I don’t do a detailed outline. Instead I do a fast rough draft, knowing that I will be filling in details later. Then once I’ve gotten to the end, I let the story sit for awhile before moving on to revisions. Often I’ll read it through first to see what I actually am working with and then figure out which aspects could be cut and which need to be expanded on. And then I revise. Often several times. In between revisions I send the story to my critique partners and beta readers in order to get some feedback other than my own. Eventually I have a story that I’m willing to set free in the world.

The next step in this process is that I’m supposed to tag three people. The people I asked to do it, never said yes or no to me and I don’t want to ambush anyone with the responsibility. So, is you want to participate, just answer these same questions yourself next week, leaving me a comment so I know about it and if the people I originally ask get back to me, I’ll add them in here.