Beth Revis over at Writing it Out was kind enough to interview me for her blog. So go on over and check it out!

Thanks Beth!
Posted by christine M at 3:31 PM 3 comments:

Today over at A Chair, A Fireplace & A Tea Cozy, Liz B has an interview with me discussing the first steps in my road to having a book in print!

As she mentions in the interview we have known each other since fourth grade. It's great to have someone you've known for that long. We've been reading each other's stories since then. What she doesn't tell you is that it's because of her that When Mike Kissed Emma got written at all. She was reading a draft of another story I had and she said "Um, Chris, don't kill me, but I think you have a whole story within a story here". She then proceeded to pull out the pages that had that story line, put them all together in one file and show me where I had the complete story arc of an entirely separate story.

Many edits and revisions later it all came together! So Thanks Liz. You can truly say you were there at the beginning!

cross-posted at The Simple and the Ordinary.
Posted by christine M at 7:17 AM 3 comments: 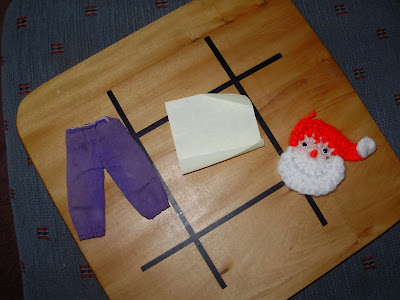 So, what do these three things have in common?

They were all bookmarks my daughter was using the other day. All for the same book. All at various times. I don't know if there is a bookmark in the book now or not.

I know I've used band-aid wrappers, junk mail, and I believe once or twice another book to hold my place.

What about you?
Posted by christine M at 5:42 PM 5 comments: 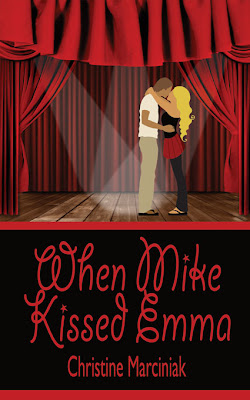 Spurred on by the challenge of NaNoWriMo I did something I didn't think I could ever do. I wrote the whole first draft of a book in two weeks. Yeah, granted, not much else got done, but the fact remains that in less than a month I have a whole first draft.

It is very much a first draft. There are scenes that are probably unnecessary and scenes that should be there but aren't. I'm sure there are places where I use the same descriptive phrase twice in close proximity.

There may be threads of the story brought in early on, but never followed through on. There may be inconsistencies in characters and descriptions.

But all of these things can be fixed in revisions.

The first draft is the skeleton. It's more than just an outline - the whole structure is there. But now I get to flesh it out and make it pretty.

I totally credit participating in NaNo for spurring me on to this. I just finished up some revisions on another story and am expecting an official revision letter for When Mike Kissed Emma (coming soon from Wild Rose Press) and I could very easily have taken these couple of weeks and written nothing.

Instead I have a whole book.

So the lesson to be learned from this? Write! You never know where it will take you!
Posted by christine M at 9:58 PM 3 comments:

Once upon a time I used to hand write my stories. That was most convenient when I was writing my stories in notebooks during class - when I suppose I should have been taking notes or something.

But once computers came on the scene I did much more of my writing on the computer. For awhile I'd write things out and then type them up. But that seemed redundant and I started typing everything.

I used to use WordStar as my word processing program. Anyone remember that. Ahh... nostalgia.

The upshot is that I've become a very efficient typer - but my handwriting has suffered dreadfully.

If I'm writing a lot by hand I use my own little short hand. Things like a straight line going down below the line I'm writing on means the word "if". Many letters go missing when I write by hand - perhaps it's the same kind of shorthand people use when texting (don't know, don't text). This of course means I can write faster. Unfortunately it also means if I don't transcribe it quickly (like within the hour) I often have no idea what it is I wrote down.

And that right there is the reason I use the computer instead of hand write my stories.

I haven't been blogging a lot because I've been writing a lot - plowing ahead with my new WIP for National Novel Writing Month.

And you know what? It's fun.

I've had this idea for a story brewing in my head for many years. I started it once way back when, started it a second time a bit later, but I never got into the meat of the story. And the thing about this story (unlike so many ideas that pop into my head) is that I knew how I wanted it to end.

The middle was a little unclear. But that's okay - that's where I am now - and I'm figuring it out as I go. The story took a few twists I didn't expect. And I'm thinking in re-writes there are some factors I need to explore more deeply. But the great thing about NaNoWriMo - it forces you not to worry about the re-writes yet. You think this part or that part could be better? Great - you'll take care of it next time around. For today - just plunge ahead. And I've been plunging.

The goal for NaNoWriMo is 50,000 words in the month of November. I'm up to 32,000 so far and trying to figure out at what point I start the downward slope toward the end of the novel.

I'll confess that I love revisions. I love knowing a story so well that you can really focus on making it the best it can be. But this is the second first draft of a story I've written this year - and I'm really enjoying this part too.