Crossed Out - a Ghost Story with a twist 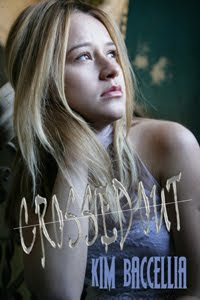 The internet has been very beneficial to my writing. Okay, it also added a whole new dimension to my procrastination, but there have been more positives then negatives.
One of the positives was getting involved with a fabulous on-line critique group. These writing buddies have pushed me to be better and dig deeper than I ever thought possible, and the publication of When Mike Kissed Emma was directly related to the influence and feedback I got from the group.
One of the members of this group has a book that just came out last month and I want to take a moment to celebrate that achievement and tell about her book.
Kim Baccellia's newest book is called Crossed Out and the premise is great fun. Stephanie Stewart has a special gift. She's a rescuer. She helps the souls of people who were murdered find their way to the light, by planting crosses that she builds and decorates at the site of the death. This helps to open the portal to heaven and the soul can follow the light and live in peace. Information about where to find the spirits that need help comes to her in dreams. The only downside is that it has to happen within 48 hours of the death, or the spirit will be trapped in this world. Oh, and everyone thinks of her as the crazy kid who sees dead people, which isn't doing much for her social life at high school.
And of course there has to be an added twist. That comes when the new kid at school shows up and seems to share Stephanie's gift. He's one hunky guy and Steph is mesmerized by him, but it's up to the boy next door to show her that the new guy may not be all he's cracked up to be.
Fast-paced and full of action, Crossed Out is a quick read that is full of colorful descriptive details. Stephanie is a very real teenager who doesn't think of herself as a hero . She would much rather spend her time thinking about guys, then trying to guide dead people to the other side. But she takes her gift seriously and persists in helping, even when it seems that everyone is against her.
Kim is currently working on a sequel to Crossed Out and I'll be excited to see where she takes the characters next. While Crossed Out wrapped up quite nicely, there were several unresolved threads that would make for a very interesting sequel. I look forward to it.
Posted by christine M at 10:37 AM