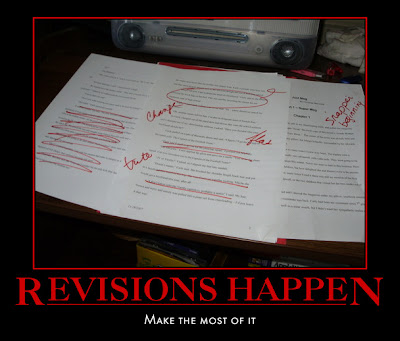 Members of my critique group were discussing revisions. Sometimes it can be so frustrating to have something that you think is just right being torn apart by well-meaning readers who just don't share the vision you had while writing it.

The things is that I don't think anyone writes a perfect first draft. And sometimes it goes way beyond first draft - to second, third, fourth, fifth drafts. And on and on.

I know it's happened to me. When Mike Kissed Emma is the final product of many many revisions. Four of them in fact after I thought it was ready to submit. Two of those complete revisions were at the suggestion of an agent (who eventually passed) and the last revision was based on suggestions made by my editor at The Wild Rose Press. And of course, it paid off, because a final version will actually be available to purchase as of August 19.

And even though I thought it was perfect each time I finished it, I have to admit that it got better with each revision.

So revisions happen. Don't be afraid of them. Let those revisions move your story toward perfection.
Posted by christine M at 3:04 PM